As discussed in more detail in a previous post, there has been a marked decline in the number of people dying in famines in recent decades, as shown in the chart below. It shows the estimated number of people dying due to famine in each decade since 1860, split by continent. It is based on our dataset of famines. 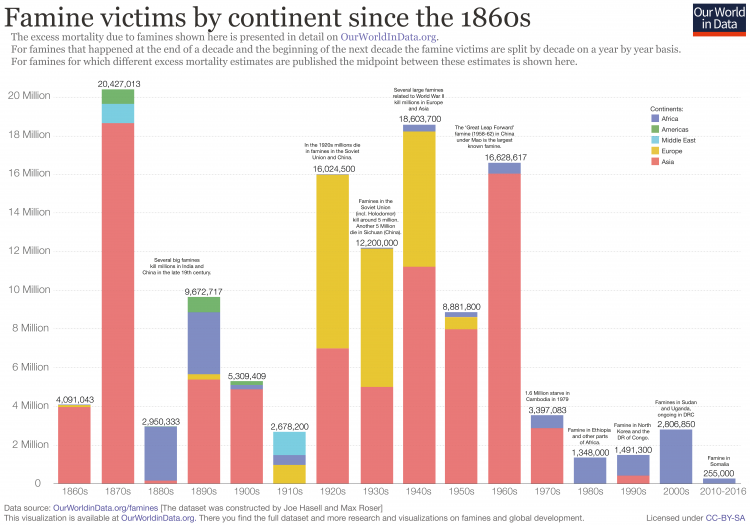 But does this recent fall really represent a permanent shift, or are we merely witnessing a chance, temporary pause?

To help answer this question, we draw on a recent article by famine researcher Alex de Waal in which he puts forward a number factors that explain the recent reduction in famine mortality.1 Whilst a range of triggers for food crises persist today – with conflict remaining particularly salient – there is a reduced tendency for such crises to translate into episodes of mass mortality. This reduced vulnerability can be linked to a number of long-term global developments, some of which we outline some below. In each case, we provide links to entries across Our World In Data in which you can find more information.

It is natural to link the reduced famine mortality to the significant increases in food per person seen in recent decades, driven primarily by increasing yields. This, for instance, seems particularly salient in the case of China and India, which between them account for well over half of the famine deaths since 1860. Whilst increases in agricultural productivity did contribute to a reduction in global poverty and reduced levels of hunger, the role of food supply per capita in relation to famines is often overemphasised.2 The decline in famine mortality is, rather, the joint outcome of a broader range global developments, including the following.

The general improvement in global health has undoubtedly played a huge role in reducing famine mortality.3 In most famines the great majority of victims do not die as a direct result of starvation, but rather succumb to infectious disease or other illnesses, with some diseases being more directly linked to diet than others. As such, the great strides made in public health, including widespread vaccination coverage, the eradication of smallpox, the reduced prevalence of malaria in many parts of the world, and improvements in access to clean water and sanitation, will have contributed greatly to the general reduction of mortality during food crises.

As Amartya Sen argued, the fact that there may be enough food available in aggregate within a given area does not necessarily mean that everyone will be able to afford it.4 Unsurprisingly, famines, with few exceptions, happen in very poor countries. As we can see below, most countries in which a famine took place had, at the time, very, very low incomes – indeed the average incomes were commonly less than half of that of the UK at the outset of its industrial revolution.

Whilst this refers to average incomes, richer countries also generally have far fewer people living in extreme poverty, both because of higher incomes before tax and benefits, but also due higher government expenditures and transfers. Higher national incomes are also associated with a range of other improvements in health and physical infrastructure that have also contributed to reducing famine mortality. Thus recent economic growth – most notably that in India and China which, throughout the nineteenth and twentieth centuries suffered heavily from famine – has played an important role in the fall in famine deaths. 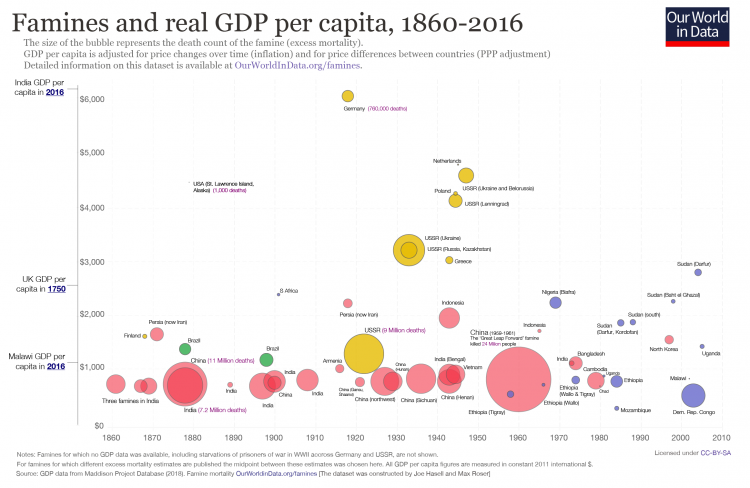 The overwhelming majority of famine deaths occurred in crises due to conflict or with overt political causes: Amartya Sen is also known for his observation that “there has never been a famine in a functioning multiparty democracy”.5 Whilst there are some exceptions to this rule that can be debated, the main idea is borne out by historical record.

Thomas Plümper and Eric Neumayer (2007) note that a number of smaller-scale events in which drought-related mortality did occur have happened in functioning democracies.6 But they show that democratic institutions are associated with reduced mortality in famines, and also a more effective translation of food aid into fewer deaths. The spread of democratic institutions can, therefore, be considered to have contributed to the decline in famine mortality too.

The world is approaching what the late Hans Rosling called “the age of peak child”: the number of births globally has flattened out and we are not far away from the largest cohort of children that there will likely ever be, as we show in our post on peak child.

This is relevant to famine trends because children under the age of five are particularly vulnerable, usually accounting for between one half and two thirds of all excess deaths in famines.7 Whilst the absolute number of children has increased, the fraction of the world population that this vulnerable age group makes up has decreased, and will continue to do so. The Demographic transition makes the occurrence of famines with very high mortality rates increasing less likely, both at a global level and as it unfolds in individual countries.

Famines in the future

Importantly, our famine data does not include any information on the ongoing food crises in Yemen, South Sudan, Nigeria, or elsewhere, including the recent period in which South Sudan was officially declared to be in famine.8 We are, as yet, unaware of any mortality estimates in each case. However, such crises are translating into world hunger levels that do appear to be on the rise.

One of the key causes of both famine and food insecurity more generally is conflict. This is as true today as in previous eras. Looking at the previous chart, you can see that a number of significant famines occurred in richer countries around the two World Wars, often in strategic blockades of civilian populations. Many of the most severe food crises today are also being driven by conflict that can cause disruption to livelihoods, trade and humanitarian access, and often involve outright human rights abuses.9

Given this continued potential for populations’ food security to be undermined, either as a byproduct, or as a direct strategy of conflict there is nothing ‘automatic’ about famine mortality remaining at the low levels seen in recent years. Furthermore, climate change — in particular the increased frequency of temperature and precipitation extremes, and crop pest and disease risks — presents a long-term threat to food security. However, the global changes that together help explain the recent dramatic reduction in famine mortality – improved health, reduced poverty, the spread of democratic institutions, demographic shifts – represent fundamental long-term developments. As such, it seems unlikely that famine mortality could return to the kinds of levels witnessed in previous centuries any time soon.