Updated daily
View our work on COVID-19 vaccinations
by Stefan Thewissen, Brian Nolan and Max Roser
Datadata descriptionLuxembourg Income Study (LIS) Database.LIS: Cross-National Data Center in Luxembourg
How widely are the benefits of economic growth shared in advanced societies? Do the rich capture the gains of growth, with little or no improvement in the living standards of the middle? Is growth raising the incomes of the poor so that they keep pace with the middle, or is the gap between rich and poor closing? Addressing these questions requires careful analysis of both the growth and distributional aspects of incomes. This article looks at the growth of disposable incomes – incomes after the redistribution through the state – over time. We rely on the Incomes across the Distribution Database put together by researchers Brian Nolan, Stefan Thewissen, and Max Roser. This data set is directly available for download: and . The data source for our database is the microdata published by the You can also access our database via the website of the .

The UK vs the US 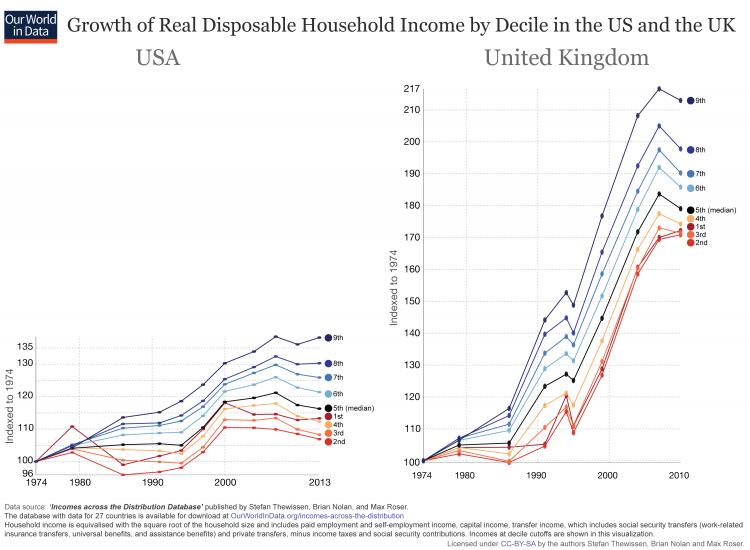 Income inequality and growth of living standards across the income distribution in the UK, 1974-2010 – Brian Nolan, Stefan Thewissen, and Max Roser

The US – incomes for most households stagnate & inequality increases constantly

Income inequality and growth of living standards across the income distribution in the USA, 1974-2013 – Brian Nolan, Stefan Thewissen, and Max Roser

Australia – rising inequality but everyone is better off

Income inequality and growth of living standards across the income distribution in Australia, 1974-2010 – Brian Nolan, Stefan Thewissen, and Max Roser

Greece – inequality is falling, yet everyone is losing

Income inequality and growth of living standards across the income distribution in Greece, 1974-2011 – Brian Nolan, Stefan Thewissen, and Max Roser

Incomes across the distribution in 27 countries 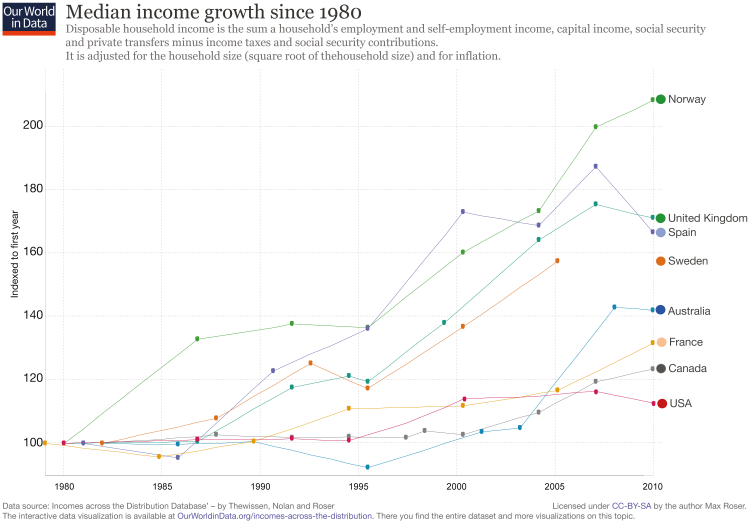 How very differently the benefits of economic growth can be shared is shown by a comparison of the USA and the UK over the last 40 years. In the US incomes for the bottom half of the population were stagnating for most of the last 4 decades (with a notable exception over the second half of the 1990s). In the UK the first period resembles the experience of the US – incomes at the bottom of the distribution were stagnating, incomes at the top were rising rapidly. But over the second period – from 1991 onwards – the trend in the UK has changed significantly: economic growth was shared equally across the distribution from the lowest to the highest decile. The comparison also show that growth in the UK – particularly for the lowest income group – was much stronger than in the US. A comparison with other rich countries shows that the experience of the US – strongly rising inequality and stagnation for a large part of the population – is unique to the US. Other rich countries were much more successful in sharing the benefits of growth across the distribution. The interactive chart offers a more detailed look at the evolution of incomes in the UK. Inequality has evolved differently in different countries; it is not one story that would be the same everywhere. Inequality is determined by the complex interactions of the tax system, government policy, education, growth cycle and many other factors. The UK experienced a large increase in inequality during the 80s but has since stabilized. The early 80s saw a period of rising inequality caused by stagnation of the middle and lower income groups and growth at the higher end. Uneven growth in the years leading up to 1991 meant further rises in inequality. Throughout the 90s and 00s, more even growth across the distribution has meant little change to inequality. In comparison with other countries it is worth pointing out that income growth in the UK was remarkably strong in the two decades leading up to the crisis. Inequality in the US has increased dramatically over time. During the 80s, we can see that the living standards of the poorest half fell while they increased for the richest. Throughout the 90s there was a sustained period of improvement at all levels of society, but without any real reduction in inequality. From the year 2000 onwards we observe a period of stagnation for the lower income groups accompanied by increased inequality as the richest capture most of the gains from growth. In 2013, approximately 60% of the population were better off in than the year 2000. Australia has also seen an increase in inequality, but in contrast to the US, the incomes of all households increased substantially. This contrast is a good example that makes clear that we cannot rely on aggregate measures – like mean GDP growth and inequality measures – alone. We have to study incomes across the entire distribution to be able to see what is happening. A last example makes clear that we should not focus on economic inequality alone: Greece has seen substantial reductions in inequality, yet the fall in incomes outweighs this development. In the period 1974-86, inequality fell sharply, as the poorest in society saw the largest improvements in living standards and the richest saw the weakest. Throughout the period displayed, the poorest parts of the income distribution experienced the largest gains. The economic crisis in Greece has meant a severe drop in living standards, incomes for the poorest are back to where they were in the 1980s. The data shown for Greece are taken from the OECD. The visualization presents the Incomes across the Distribution Database (available below) for 27 countries. (To see the growth by decile – indexed to the first year – you can access this chart .) These visualizations show median income growth over time. The static chart shows, that while median incomes in the US have been almost stagnant over 3 decades, the populations of other rich countries have experienced substantial income gains. The median households in Spain, the UK and Norway in particular are much better off than 3 decades earlier. The interactive version of this chart allows you to compare the median incomes of even more countries. Median household incomes – adjusted for price differences between countries (PPP-adjustment) – can be added by the ‘’ option. If you are interested to see income growth at the bottom end of the income distribution you can access the visualization . This last visualization in this entry compares median and mean incomes. 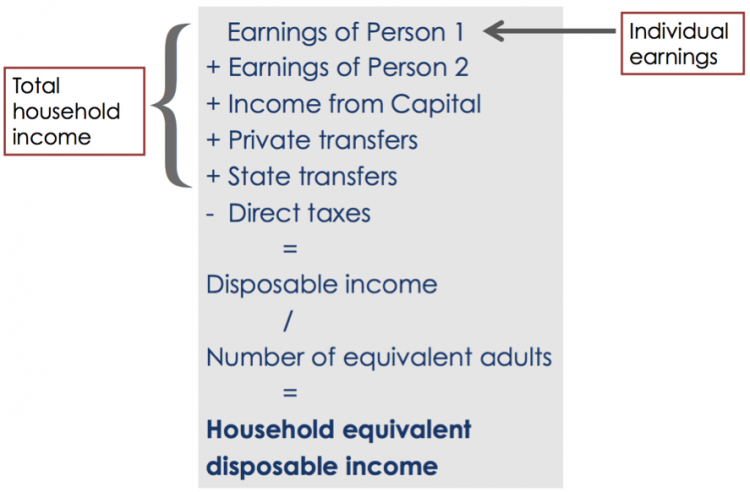 Data on CPI and deflators

here
The decile cut-offs and means are calculated on the basis of disposable household income. The measure of disposable household income employed in the Luxembourg Income Study Database is paid employment and self-employment income, capital income, transfer income, which includes social security transfers (work-related insurance transfers, universal benefits, and assistance benefits) and private transfers, minus income taxes and social security contributions. This follows the definitions of the Canberra Group. The income definition is visualized in this figure. Market household income – for which you find data in the dataset but not in this entry – is defined as the sum of labour income (paid employment and self-employment income) and capital income. Two households on the same income but one comprising a single individual and another a couple with two children will have differing living standards, because a household with several individuals benefits from economies of scale in consumption. We include both equivalised and per capita decile information in the database. For per capita income, we calculate household income and divide it by the number of household members. For equivalised income, we assume economies of scale by applying the square root of the household size as the equivalence scale. Both per capita and equivalised income assume equal sharing of income across individuals within a household. To use income levels to measure living standards, the income measures are corrected for changes in price levels over time and in purchasing power across countries. We use the consumer price index (CPI, from OECD Consumer Prices (MEI), all items) to deflate household income. To convert to a common currency we apply Purchasing Power Parities for actual individual consumption to household incomes sourced from OECD National Accounts. We express all PPP-adjusted figures in 2011 international dollars. We provide all incomes in both nominal terms and in inflation-adjusted 2011 international dollars in the full database that is directly available . The gini index is the most commonly used inequality measure and is explained .

Incomes across the Distribution Database

All of the data presented in the visualizations in this data entry was assembled by Stefan Thewissen, Brian Nolan and Max Roser (Institute for New Economic Thinking at the Oxford Martin School, University of Oxford). This data is published as the Incomes Across the Distribution Database.