Our World in Data presents the empirical evidence on global development in entries dedicated to specific topics.

This blog post draws on data and research discussed in our entry on World Population Growth. UPDATE: On September 20 and again on October 7 I have updated the World Population Cartogram and made a number of minor changes. The Japanese translation of this blog post is here:グローバルな生活条件がどのように変化しているのかを私たちが考えようとするときに必要な地図.

Our mission here at Our World in Data is to show how living conditions around the world are changing.

To show global data it is convenient to use a map. But despite the popularity and familiarity of world maps, they can mislead our understanding of how living conditions around the world are changing. They are made for a different purpose; geographical maps show us where the world’s land masses are and where country borders run. They don’t show us where the people are.

So I spent the last few weekends making this cartogram for the world population in 2018.

As the size of the population rather than the size of the territory is shown in this map you can see some big differences when you compare it to the standard geographical map we’re most familiar with. Small countries with a high population density increase in size in this cartogram relative to the world maps we are used to – look at Bangladesh, Taiwan, or the Netherlands. Large countries with a small population shrink in size – talking about you Canada, Mongolia, Australia, and Russia.

Keep this cartogram in mind when reading other charts

We should keep this cartogram in mind when we are looking at charts that show country-by-country data, because we have to remember that the number of people that these charts speak about is very different from one country to the next: An increase of the life expectancy in Denmark means that the average health of 5.8 million people is increasing, while an increase for India means that the health of 1,354 million people is improving. And a line chart that shows improvements in all African countries or across all of the American countries refers to fewer people than a chart with a single line that shows an improvement in China. The two largest countries in Asia – China or India – are the home of more people than any other entire continent.

[click on the cartogram to enlarge it. And here you can download the population cartogram in high resolution (6985×2650).]

Cartogram of the World Population in 20181

When I made this visualization I built upon the work of others that made cartograms of the world population at earlier points in time: From cartograms from more than a century ago, to recent ones that emphasize the split between continents, to some that are very similar like this one for 2005, and especially this one for 2015.2

Some perspectives on the distribution of the world population

The cartogram offers us many more perspectives that we can keep in mind if we want to keep an overview of the world. Here are some that stand out for me:

The cartogram below focusses on Asia and Oceania where 6 out of 10 people in the world live. 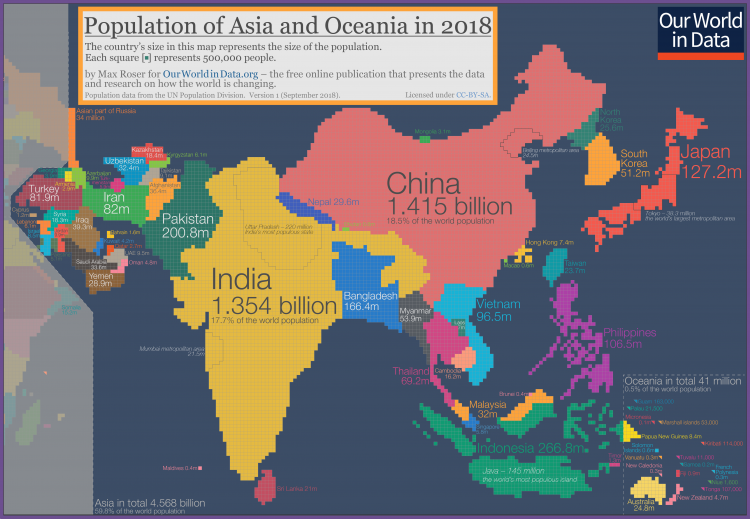 The population of the Americas is roughly one billion (1.015 billion). 428 million live in South America and 587 are at home in North America, Central America, and the Caribbean. 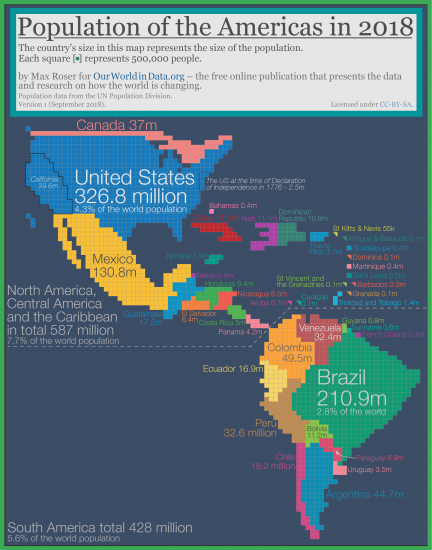 1-in-6 people in the world live in Africa. The second most-populous continent is home to almost 1.3 billion people. 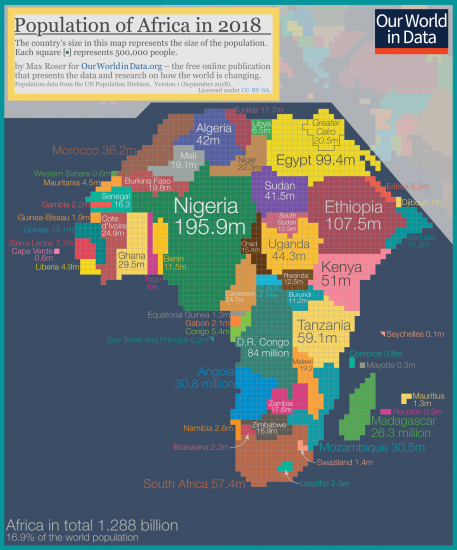 711 million people live in Europe, less than 10% of the world population.8 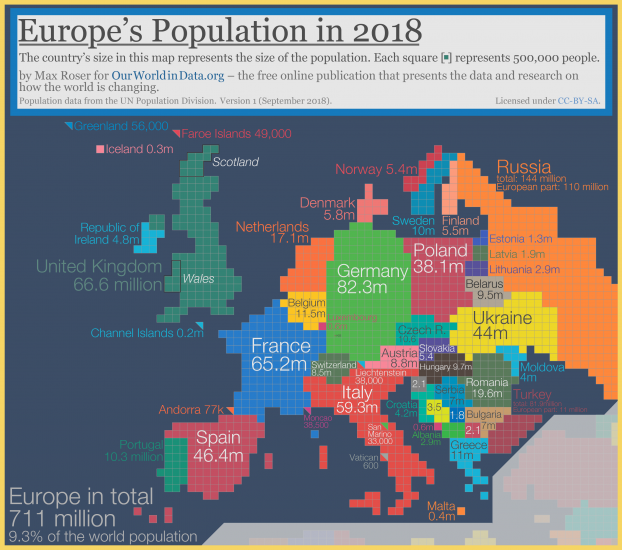 Another way to show where the world population lives is to show the population density of each country on a geographical world map, as you see below. The world’s densely populated countries in Middle America, Europe, and South East Asia stand out – Bangladesh is the most densely-populated large country in the world, with 1,252 people per square kilometer. If you hover the mouse on the bracket from 0 to 10 on the legend then you see the world’s least densely populated countries.

While a geographical map is helpful if you want to find your way around the world, a population cartogram is the representation that we need if we want to know where our fellow humans are at home.

If you are interested in what is happening to the world population and you are following our work on Our World in Data, I hope these cartograms are helpful to you. If you want to print it you can get it in high resolution here.