Antibiotics are antimicrobial drugs used to kill bacteria. Along with vaccines, antibiotics often top lists of the most important medical discoveries, with both interventions having a tremendous impact on illness and deaths from communicable diseases.1

However, the usefulness of antibiotics to medicine is under threat. A national campaign in the UK called ‘Keep Antibiotics Working’ is trying to prevent antibiotic misuse and overuse by making the point that antibiotics are useless for many illnesses that they are asked for (for example, viral infections such as cold or flu) and contribute to the 5,000 deaths a year in England from untreatable illnesses.

Still it is poorer countries across the world that are likely to take the biggest toll from antibiotic-resistant infections. In 2014 a UK study predicted that by 2050 the African region will account for 4.15 million deaths a year attributable to antibiotic-resistant infections and the Asian region 4.73 million. The World Health Organization (WHO) is pursuing a similar campaign this week encouraging all countries to think about antibiotic resistance for ‘World Antibiotic Awareness Week’. The theme this year is: ‘Seek advice from a qualified healthcare professional before taking antibiotics’.

Vaccines as a solution for antimicrobial resistance

Increasing resistance could make common interventions of modern medicine, such as surgery, chemotherapy, and caesarean sections too dangerous to carry out. As England’s Chief Medical Officer Dame Sally Davies already warned in 2013:“Antimicrobial resistance poses a catastrophic threat. If we don’t act now, any one of us could go into hospital in 20 years for minor surgery and die because of an ordinary infection that can’t be treated by antibiotics.”

One means of slowing antimicrobial resistance is by combating misuse and overuse as proposed by the campaigns ‘Keep Antibiotics Working’ and ‘Seek advice from a qualified healthcare professional before taking antibiotics’. Other measures include encouraging better hygiene and infection control, surveillance of drug resistance, and reducing the overuse of antibiotics for livestock in agriculture (we at OWID looked at this issue in last week’s post).

Another option is to foster scientific discovery, in order to produce new antibiotics or diagnostics to analyze whether antibiotics are indeed needed. New vaccines are not often connected with solutions for antimicrobial resistance. But vaccine resistance compared with antimicrobial resistance is rare. With a vaccination there is less time for the pathogen to evolve as the body is ready to fight off the infection and also because vaccines target many structures of the pathogen, while antimicrobial drugs target one specific part of the pathogen so that just one mutation can result in resistance.2 Vaccines therefore present opportunities to reduce our dependence on antibiotics. They can do this in two ways:

Vaccines that are particularly worth scaling up are for pneumococcus and Haemophilus influenzae type b (Hib), to tackle the approximately 935,000 worldwide of under-5 deaths from pneumonia each year, with these vaccines not yet sufficiently deployed in China, India, Nigeria, Bangladesh, Afghanistan and Indonesia.6 Laxminarayan et al. estimate that for children under 5 years, this amounts to a 47% reduction in days on antibiotics per year with a pneumococcal conjugate vaccine (PCV) that can prevent pneumonia. As the visualization below shows, 11.4 million days of antibiotics could be saved in the 75 countries included in their analysis. 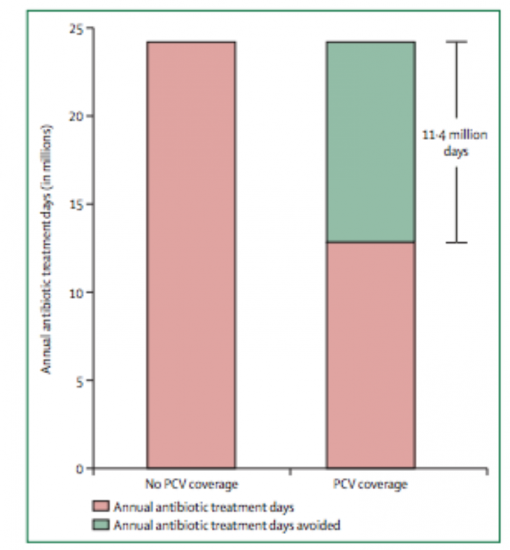 How new vaccines can help

No vaccines are currently available for the three bacteria highlighted by the US Centers for Disease Control and Prevention (CDC) as an ‘urgent’ hazard of developing resistance (Clostridium difficile, Carbapenem-resistant Enterobacteriaceae or CRE and drug-resistant Neisseria gonorrhoeae).8 The CDC lists 11 bacteria and one fungus at the ‘serious’ hazard level, and three bacteria at the ‘concerning’ hazard level.

As our visualization below shows, new vaccines tend to take a long time and vast resources to develop. However, it could be an investment that is worth making, as the problem of antimicrobial resistance does not affect vaccines. Bacterial diseases routinely vaccinated against for decades, for example diphtheria and pertussis, have not shown significant resistance against antibiotics and also resistance for other diseases has been reversed after the vaccine was introduced.9

A bacteria that the CDC listed as at a serious hazard level was drug-resistant Salmonella typhi, causing typhoid fever (simply known as typhoid). Typhoid is a bacterial disease that infects over 12 million people worldwide each year. The two current vaccines that are available are not suitable for young children nor protective for long periods of time, plus multi-drug-resistant typhoid has been on the rise.

A new vaccine for typhoid, tested successfully by the Oxford Vaccine Group at the University of Oxford could help reduce dependence on antibiotics. The new typhoid conjugate vaccine (TCV) is suitable for children under two and offers longer lasting protection. Gavi, the international organisation that funds vaccines in low and middle-income countries, is now considering backing the vaccine. The chief executive of Gavi, Dr Seth Berkley has stated: “Not only could this vaccine save lives, it could also prove to be a valuable weapon in the fight against antimicrobial resistance.”

We need to pursue a wide range of options in order to deal with antimicrobial resistance, including new vaccines. The TCV for typhoid is a step in this direction. 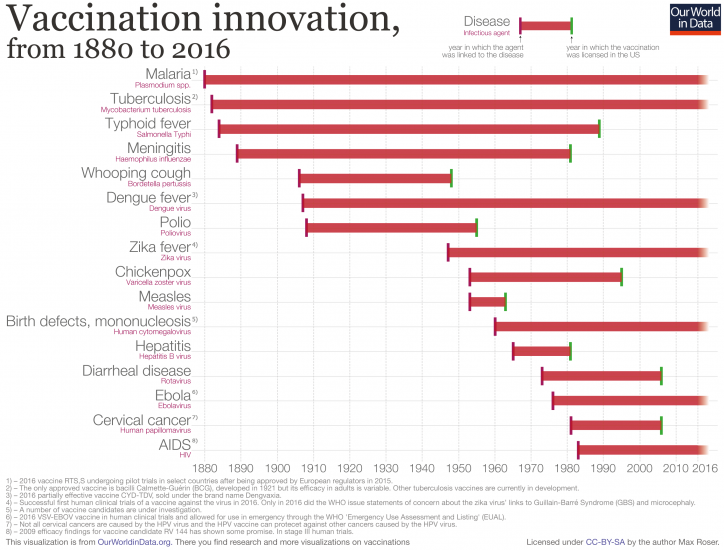