Over the last couple of years several studies have found that trade has a negative impact on earnings and employment for some groups of people. This fact, which I discuss in a companion blog post, is usually interpreted as evidence that trade is a major driver of income inequality. This interpretation is incorrect.

In a review of the evidence, Helpman (2016)1 writes: “A major conclusion from my review of the literature is that the prevalent view that globalization is primarily responsible for the large increase in the inequality of labor compensation has no basis in the evidence. Yes, globalization impacted the wages of different types of workers to different degrees, and yes, it contributed to an increase in the wages of skilled relative to unskilled workers through multiple channels. Yet, in sum, all these effects explain only a fraction of the rise in wage inequality in rich and poor countries alike.”

Pavcnik (2017)2 reviews the literature with a focus on low- and middle-income countries, and comes to a similar conclusion, and emphasizes that while the impact of trade on inequality is real, it is also very sensitive to context-specific factors, such as policies and labor market frictions (such as the mobility of workers and capital across firms, industries, and geographic locations).

The fact that context-specific factors heavily influence the impact that globalization has on inequality is part of the reason why we observe such different inequality trends between countries.

The chart below shows the share of total incomes going to the top 1% over the last century in a number of rich countries. As we can see, since the late 1970s there are diverging trends – in the US and other English-speaking countries the inequality returned to the high levels of a century ago. However, this did not happen in the continental European countries or Japan.

These diverging trends are a good reminder that globalization and income inequality are not one and the same. National policies matter. 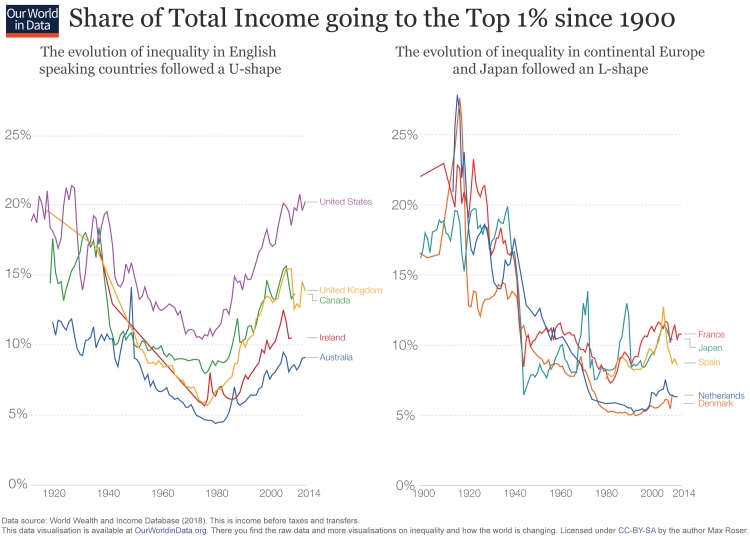